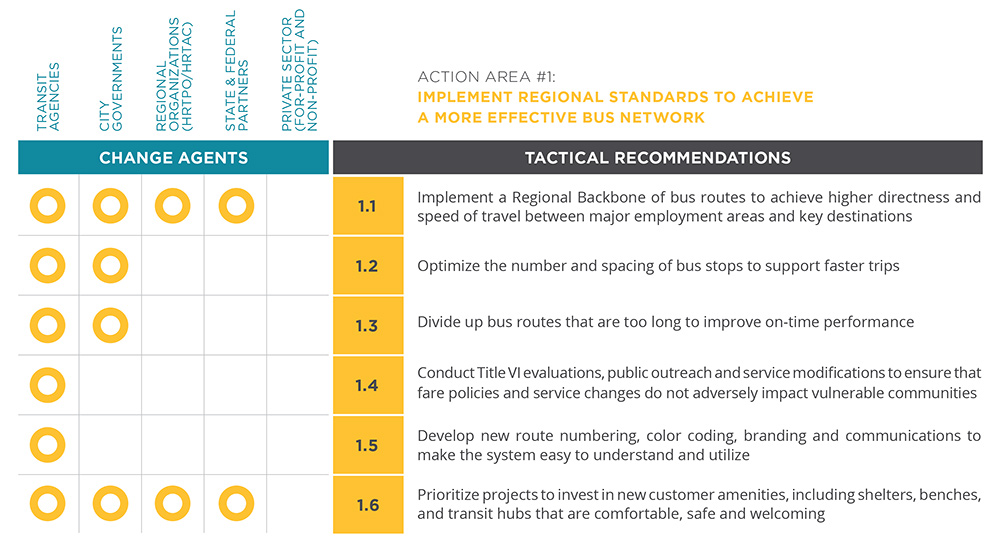 To have the greatest positive impacts, the new Regional Standards should be applied uniformly across the HRT service area. Depending on the type of service, hours of operation will be the same across the regional system. Frequency would also be consistent across the jurisdictional boundaries, based on type of service. Frequency standards address how often buses come by a stop to pick up and drop off customers.

Regional Backbone routes will criss-cross the region along the major corridors that have the highest travel demand and connect the most people to the most jobs. These are areas with higher population and employment density. The most frequent service will happen on Regional Backbone routes, where buses will come every 15 minutes during the busiest hours of the day. This is one of the Top Priorities that citizens across Hampton Roads have identified for having a better regional bus.

Local Priority routes would be the “work horse” of the overall system. Frequency on these routes is every 30 minutes during rush hours. They may run within a single city or cross city boundaries, and will provide important connection points to the core transit network. Population and employment densities will typically be a little lower in these areas compared to the Regional Backbone.

Coverage routes will provide service on an hourly basis for areas where overall demand for public transportation is generally lower, yet transit still serves important community needs like access to jobs.

Limited or Express routes. Buses on these route make a limited number of stops and commuters have shorter travel times to get to and from key destinations, like major employers.

On-Demand service. In some areas it will not be most effective to operate regular bus service. Designated areas or “zones” will feature On-Demand service. Rather than using larger buses that travel regular route patterns, customers will catch smaller vehicles that will provide pick-ups and drop-off at various locations within a zone and connect passengers to the Regional Backbone or other types of transit.